When is the March for Large-Scale Preregistered Replications?

Why are progressives calling this weekend's demonstration the "March for Science"? Why not the "March for Equality," or the "March for the Environment," or even the "March for NIH Funding"? The reason, of course, is science-gilding, the covering of one's ideological positions with the veneer of scientific objectivity. It's very tempting. Ideological debates are messy and difficult to win, but Science sounds so authoritative. Just say "Science" and drop the mike. 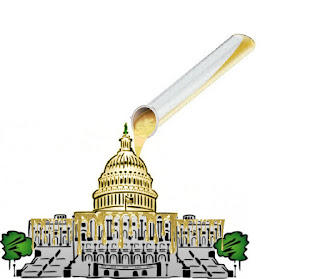 Unfortunately, some scientists are only too happy to help. In a piece for National Review this past week, I wrote that researchers are subject to similar biases and pressures faced by others in the public sphere. The "replication crisis" is the best evidence. After quoting the passage from my American Conservative article outlining how replication failures have left psychologists uncertain that bilingualism makes people smarter, I noted that the prevailing scientific view on bilingualism had previously just happened to follow the prevailing political view on multiculturalism:


“Bilingualism makes people smarter” is itself a reversal in the literature. Before the 1960s, the opposite view predominated. “The general trend in the literature relating to the effect of bilingualism upon the measure of intelligence, has been toward the conclusion that bilinguists suffer from a language handicap,” according to a 1953 review paper. So at a time when assimilation was the prevailing ideology among political elites, science told them bilingualism is bad for the mind. Later, when multiculturalism became the prevailing ideology among elites, science told them bilingualism is good for the mind. Which is the cause and which is the effect here?

Thank goodness for the replication crisis and the renewed interest in scientific transparency that has come along with it. If there were a March for Large-Scale Preregistered Replications, I would be on the front lines.

Has that march been scheduled yet?
Posted by Jason Richwine at 9:21 AM
Email ThisBlogThis!Share to TwitterShare to FacebookShare to Pinterest