The most common non-education job held by education majors is...

The American Community Survey, a mini-Census conducted each year, began asking college graduates for their degree field in 2009. The new information helps answer a number of important questions about both the labor market value of different degrees and the skills possessed by different workers.

One question that's interested me for the past several years is how the skills of public-school teachers compare to the skills of other college graduates. A common view is that teachers should be paid like the average college graduate, but not all four-year degrees are created equal.  Elementary school teachers typically major in education, which is often considered one of the least rigorous courses of study. (Secondary school teachers, being more specialized, usually major in an academic field or in how to teach a particular field.)

One way to better assess teacher skills is to examine what happens to the wage of the typical worker who switches between teaching and non-teaching jobs. It turns out that people generally receive a pay raise when they move into teaching and a small pay cut when they move out, which implies that teacher salaries are at least adequate on average.

Another way to gauge teacher skills is to look at the types of non-education jobs held by education majors. If trained teachers tend to work prestigious jobs outside of teaching, that would suggest their skills are broadly valued and transferable. The first table below shows that 60.6 percent of people with a degree in education (and who have worked within the last five years) have an education-related occupation. The next table lists the top 10 occupations of the 39.4 percent of education majors who have a non-education job. The most common non-education job is administrative assistant, followed by retail salesperson, miscellaneous manager, childcare worker, and first-line supervisor of retail salespersons. 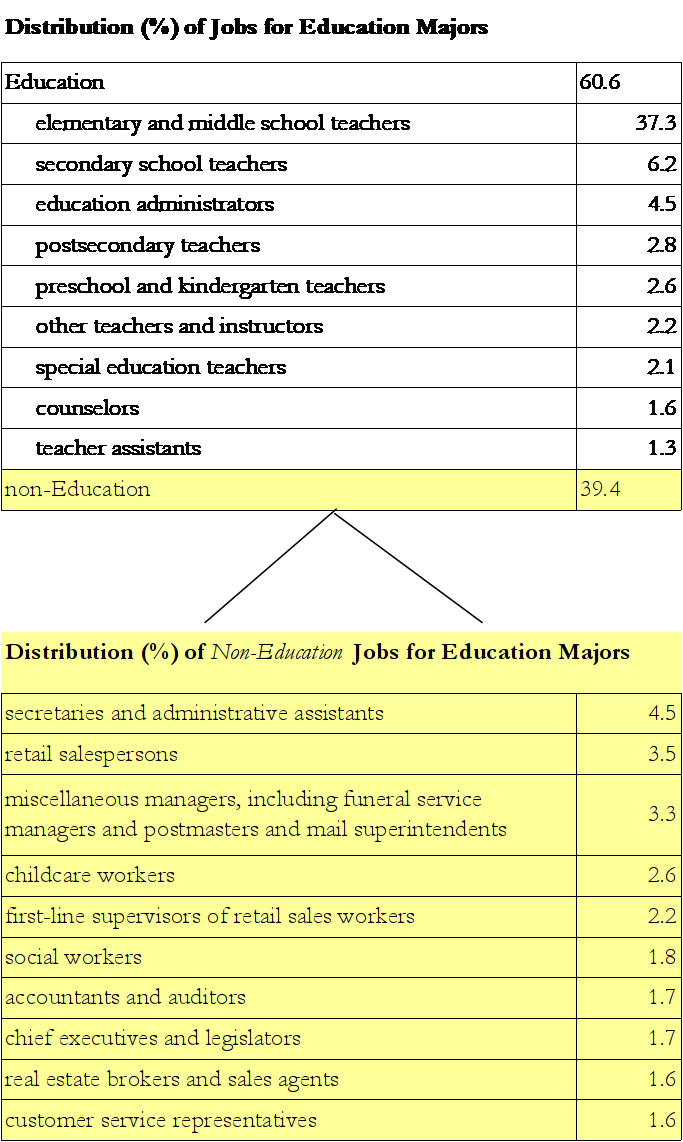 Posted by Jason Richwine at 7:36 AM
Email ThisBlogThis!Share to TwitterShare to FacebookShare to Pinterest