The value of a college major... in the American Community Survey

Administrators of the enormously useful Integrated Public Use Microdata Series (IPUMS) web site sent an email this week warning of changes to the American Community Survey (ACS), which is a mini-Census conducted each year. Specifically, the Census Bureau is proposing to eliminate ACS questions dealing with marital history and college majors. IPUMs administrators, who streamline the ACS (and other datasets) for easy use by researchers, are concerned about the loss of those questions.

It's not my place to declare what the Bureau should do with its limited budget. I obviously haven't performed the cost-benefit analyses needed to determine which ACS questions should stay and which should go.

But, cost aside, the ACS question about college majors is valuable to researchers. Labor economists in particular are forever looking for a robust measure of human capital. Knowing whether a person graduated from college is useful, but it's even more useful to know the field the person studied. After all, workers with engineering diplomas are likely to possess more valuable skills (in terms of both knowledge and raw ability) than workers who studied, say, nineteenth-century French poetry.

Without a strong measure of human capital, it's difficult to investigate questions about the returns to education. It's also difficult to match workers with similar skills. When Andrew Biggs and I analyzed the wages of public- versus private-sector workers, we did our best to generate an apples-to-apples comparison by controlling for human capital differences. We discovered that controlling for college major -- as opposed to controlling only for college graduation -- made a significant difference in our results. 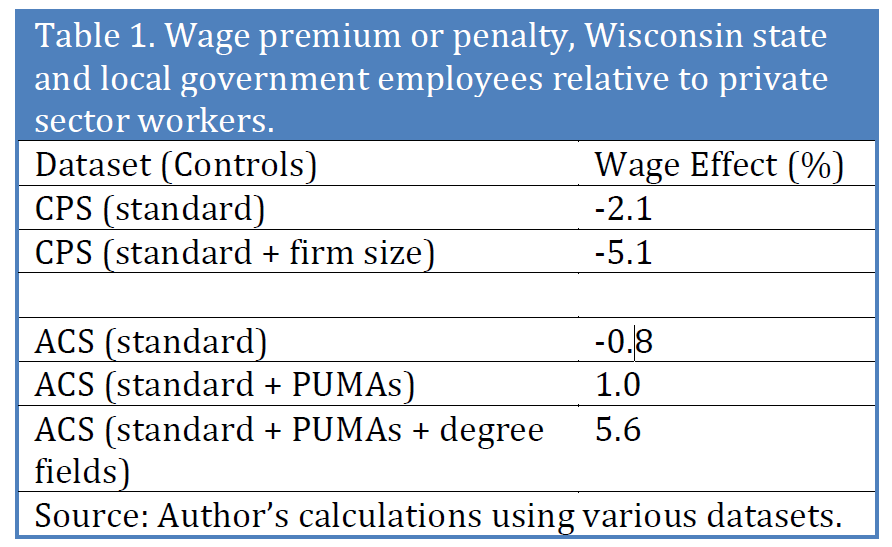 The table above comes from our analysis of Gov. Scott Walker's public-sector reforms in Wisconsin. It shows the wage premium (a positive value) or wage penalty (a negative value) associated with working for the Wisconsin state government relative to the private sector. The premium/penalty varies depending on the dataset and the skills controlled for. But notice the difference between the last two rows. The premium is 1.0 percent when using the standard controls along with PUMAs (geographic areas). But the premium goes up to 5.6 percent when degree fields are included.

Apparently, Wisconsin state workers tend to hold college degrees in fields that are less valuable than the degrees held by college grads in the private sector, with obvious implications for a pay comparison. That's the kind of result that we would not be able to observe in future years if the ACS changes go through.
Posted by Jason Richwine at 8:25 AM
Email ThisBlogThis!Share to TwitterShare to FacebookShare to Pinterest