Julia Ioffe and the cure for Gell-Mann amnesia

Building on what seems to be a new subgenre of political journalism, the New Republic has a long piece about how the Heritage Foundation has allegedly changed under Jim DeMint’s leadership.

What caught my eye was reporter Julia Ioffe’s reference to the development of the Heritage immigration study I co-authored with Robert Rector. Here’s her sentence: “Policy analysts were shut out of the discussion, and the paper, which was written to conform with DeMint’s anti-immigration stance, did not go through the standard vetting procedure.” 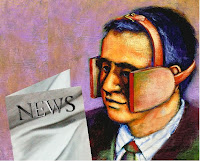 All three claims in that sentence are flat-out false. But why worry about facts when you've got a great (made-up) story to tell?

One wonders how accurate the rest of her piece could be. I’m reminded of what the late novelist Michael Crichton called the “Gell-Mann amnesia effect”:

Briefly stated, the Gell-Mann Amnesia effect is as follows. You open the newspaper to an article on some subject you know well…. You read the article and see the journalist has absolutely no understanding of either the facts or the issues. Often, the article is so wrong it actually presents the story backward—reversing cause and effect. I call these the “wet streets cause rain” stories. Paper’s full of them.

In any case, you read with exasperation or amusement the multiple errors in a story, and then turn the page to national or international affairs, and read as if the rest of the newspaper was somehow more accurate about Palestine than the baloney you just read. You turn the page, and forget what you know.... The only possible explanation for our behavior is amnesia.

Whenever I feel a bout of Gell-Mann amnesia coming on, I re-read articles like the one in the New Republic. Cured in no time!
Posted by Jason Richwine at 2:07 PM
Email ThisBlogThis!Share to TwitterShare to FacebookShare to Pinterest